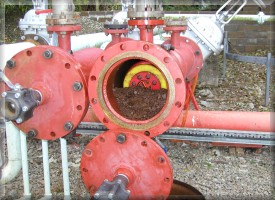 Pipeline pigs are devices that are inserted into and travel throughout the length of a pipeline driven by a product flow. They were originally developed to remove deposits which could obstruct or retard flow through a pipeline. Today pigs are used during all phases in the life of a pipeline for many different reasons.

Although each pipeline has its own set of characteristics which affect how and why pigging is used, there are basically three reasons to pig a pipeline:

The pigs which are used to accomplish these tasks can be divided into three categories:

The type of pig to be used and its optimum configuration for a particular task in a particular pipeline should be determined based upon several criteria, which include:

Utility pipeline pigs can be divided into two groups based upon their fundamental purpose:

Within these two groups, a further subdivision can be made to differentiate among the various types or forms of pigs:

• Mandrel pigs, which have a central body tube, or mandrel, and various components which can be assembled onto the mandrel to configure a pig for a specific duty;

• Foam pigs, which are molded from polyurethane foam with various configurations of solid polyurethane strips and/or abrasive materials permanently bonded to them;

• Solid cast pigs, which are moulded in one piece, usually from polyurethane, and;

• Spherical pigs or spheres, which are of either a solid composition or inflated to their optimum diameter with glycol and/or water.

A geometry / caliper pig is a configuration pig designed to record conditions, such as dents, wrinkles, ovality, bend radius and angle, and occasionally indications of significant internal corrosion by making measurements of the inside surface of the pipe. 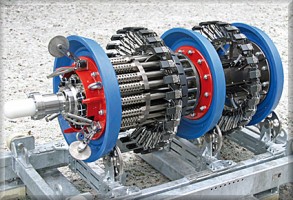 Although the two most common requirements are for geometry/diameter 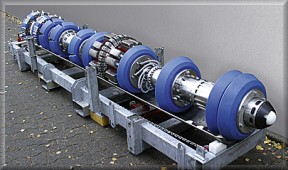 measurement and for metal-loss/corrosion devices, the information which can be provided by these intelligent pigs covers a much wider range of inspection and troubleshooting needs which include:

A plug is a specialist pig that can be used to isolate a section of pipeline at pressure while some remedial work is undertaken.

The plugs can withstand pressures up to 200 bars typically. The plug works by gripping into the line pipe and then having a separate sealing system. Lower pressure techniques include High Friction pigs, which provide a barrier for depressurised systems. 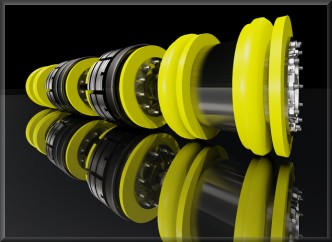 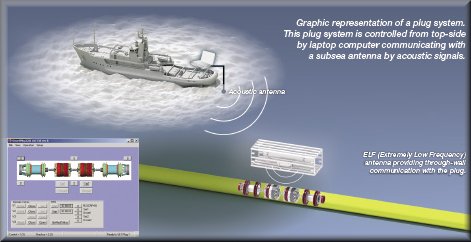 Gel pigs are a series of gelled liquid systems which have been developed for use in pipeline operations, either during initial commissioning, or as a part of a continuing maintenance program. Most pipeline gels are water-based, but a range of chemicals, solvents, and even acids can be gelled. Some chemicals can be gelled as the bulk liquid and others only diluted in a carrier. Gelled diesel is commonly used as a carrier of corrosion inhibitor in gas lines. There are four main types of gel that are used in pipeline applications:

As a liquid, although highly viscous, the gel can be pumped through any line which will accept liquids. Gel pigs can be used alone (in liquid lines), in place of batching pigs, or in conjunction with various types of conventional pigs. When used with conventional pigs, gelled pigs can improve overall performance while almost eliminating the risk of sticking a pig.

Gel pigs do not wear out in service like conventional pigs. They can, however, be susceptible to dilution and gas cutting. Care must be taken, therefore, when designing a pig train that incorporates gel pigs to minimize fluid bypass of the pigs, and to place a conventional pig at the back of the train when displacing with gas.

The principle pipeline applications for gel pigs are as follows:

Specially formulated gels have also been used to seal valves during hydrostatic testing. Gels have been developed with a controlled gellation time and a controlled viscosity for temporary pipeline isolation purposes.

Pig traps are used for inserting pigs into a pipeline then launching, receiving, and finally removing them without flow interruption. Pig traps are not generally proprietary products and are usually made to a specification drawn up by the user. However, pig trap closures are proprietary products and form a critically important part of a pigging system. Safety is a major consideration in the selection of a closure. All closures must have a built-in safety lock which prevents them being opened while the trap is pressurised. 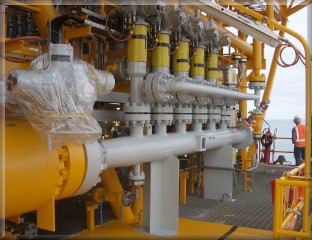